There’s nothing quite like arming yourself with a water gun and lifting a 7000lb truck ten feet above your head with it. And if you were at Stampede last summer, you might have done just that at the GMC ProShot exhibit—one of my favourite projects from 2014.

We’ve worked with Momentum Wordwide, one of the top advertising agencies in the country, on several different projects over the past few years and every one of them has been a creative masterpiece and a challenge for our production and fabrication teams. The GMC ProShot exhibit was no exception, but my mantra has always been ‘if it’s worth doing, it’s worth doing well.’

GMC’s mandate for Momentum Worldwide was “An engaging activation for the 2015 GMC Sierra HD that featured the truck in a premium, but contextually relevant, manner.”

What MWW came up with was a spectacular idea: take a classic midway game, make the water guns bigger & badder, and skip the fluffy stuffed animals. Lift a 7000lb Sierra HD instead. No big deal, right?

Naturally, when MWW realized what a challenge this kind of custom exhibit was going to be, they turned to Exhibit Studio to help bring this idea to life. They’ve worked with me and my production crew enough to know that we laugh in the face of a challenge. Well, laugh, swear, get down to work, and then laugh again when the exhibit is successfully built. You know how it is.

So how did we do it? We started two months out from Stampede’s opening day, collaborating with MM on the graphic and 3D design of the exhibit space. With the design nailed down, we moved onto the materials. Determining what each and every component would be constructed from, sourcing hardware, material, and the mechanical parts that would make the game possible.

That was the easy stuff. 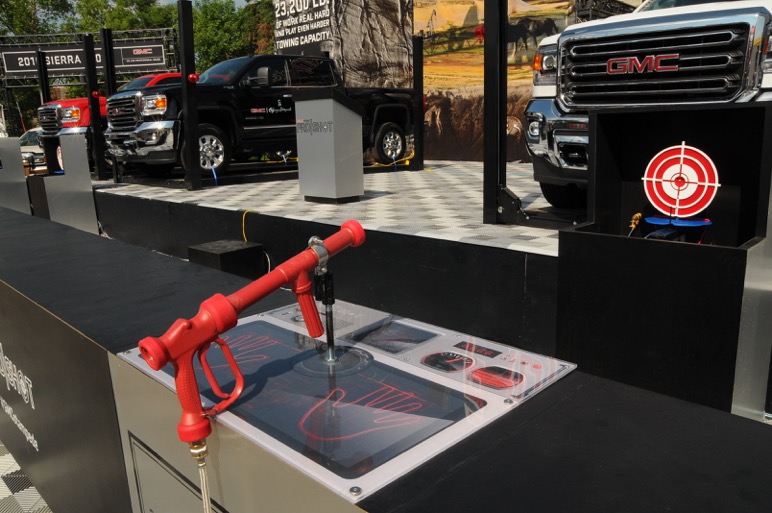 Engineering the actual water guns and hydraulic lifts, as well as moving targets to make this game a real challenge, that was the fun part. I use the word “fun” loosely here, but man, when this started to come together, it was AWESOME.

Of course, along the way we had to make sure that everything—the display, the layout, the game—all met with the Stampede’s rules and regulations. Our show management team was invaluable in ensuring that everything we did followed the rulebook to a T.

When the Stampede opened on July 4th we were there in our finest black and orange T-shirts, exhausted, but standing proudly beside the GMC ProShot game we had built entirely from scratch. It was a pretty amazing experience!

It was unquestionably a success. Remember that mandate? With over 100,000 interactions between GMC’s staff and visitors, and some 2795 people who played the game, the ProShot was definitely engaging. And hey, a suped-up carnival game at the Stampede? Seems “contextually relevant” to me.

Momentum Worldwide documented the whole ProShot experience—check out the video on our YouTube channel—and won an Award of Distinction at the 2015 SMAs in the Festivals & Events category.

So what’s next? As I said, we laugh (politely) in the face of challenge, so bring us yours and we’ll make your vision come to life in spectacular fashion.

*Update July 2015: GMC ProShot is the 2015 winner for the best partner exhibit at the Calgary Stampede… awesome!