New to the exhibit circuit? There’s a lot to learn! Knowing some of the key terminology from within this industry will help…

Banner Stand: Any graphic display that showcases a vertical graphic “banner” via a hardware framework.

Build & Burn: A term used to describe any display/exhibit designed and built for one-time use.

Custom: A display designed and built to meet the specific needs of an exhibitor.

Double-Decker: An exhibit with an upper deck or second story.

Fabric Display: Refers to the type of portable display where a printed fabric graphic is stretched over the hardware system. May use velcro or zippered closures.

Knockdown (KD): An exhibit with separate components that must be assembled on-site.

Modular: An exhibit constructed with interchangeable components designed to be set up in various configurations and sizes.

Pop-Up Display: Portable display where the framework ‘pops’ up and snaps together, to which graphic panels are attached.

Portable: A term that covers many different types of displays, so long as they are lightweight enough to be moved without a forklift.

Self-Contained: A display which uses the shipping case as an integral part of the exhibit.

Truss: May refer to the overhead hardware above a stage or exhibit, or a modular display where the hardware components include a truss system.

Corner Booth: An exhibit space with exposure on at least two aisles.

Cross-Aisle: An aisle at a right angle to a main aisle.

In-Line (or Linear) Booth: Exhibit spaces that are part of the continuous line along an aisle. Neighbouring booth spaces on both the left and right.

Island Booth: Where your booth space is akin to an island; alone with aisles on four sides.

Peninsula: An exhibit space with aisles on three sides—neighbouring booth space on the back.

Perimeter Booth: Any booth space that backs against the building/structural wall of the exhibit hall.

Pipe & Drape: Tubing covered with draped fabric to make up the rails and backwall of a trade show.

Side Rail: A low divider wall, usually pipe and drape, used to divide one exhibit space from another.

Hardwall: A type of exhibit construction in which divider walls are made of a solid material, rather than drape.

Advance Receiving: Location set by show management to receive freight before the start of show. Freight is stored at this location and then shipped to the show at the appropriate time.

Material handling/Drayage: The movement of show materials from shipping dock to booth for show set up and back to dock for return shipment at end of show.

I&D: Refers to Installation & Dismantle (of an exhibit). Also known as Setup & Take Down.

Marshaling Yard: A lot where trucks gather for orderly dispatch to show site.

Targeted Move In: A specific day and time that you are scheduled to move your booth into a show hall.

On The Show Floor

Boneyard: A storage area for empty crates and contractor materials.

Booth Babe: Also known as a CSR or a hostess. An outdated term for the more PC ‘Crowd Gatherer’; staff hired with the express purpose of drawing a crowd to the booth space.

Lead Retrieval: An electronic system used at a trade show to capture lead information. Used in place of Lead Cards.

Visqueen: A clear plastic sheeting that is placed over exhibit carpeting after its laid in order to protect it until the show opens.

Backlighting: Use of a light source to illuminate translucent material from behind.

Electrical: Refers to the ordering and placement of the electrical outlets in your booth space.

Fire Retardant: Term used to describe a finish which coats materials with a fire-resistant (not fire proof) cover.

Header: A sign or other structure across the top of an exhibit.

Rendering: A computer 3D model of an exhibit or display.

Sintra: Rigid plastic sheets often used in exhibit construction. Available in a variety of colours. Can be direct-printed or used for mounting graphics.

Throw Cover: Fabric covering for the standard 6′ or 8′ table often offered with a booth space rental. Can be custom printed.

What do you think, did we miss any of the important ones? Have you heard a trade show term you’re not familiar with and couldn’t find it on this list? Leave your questions & comments below! 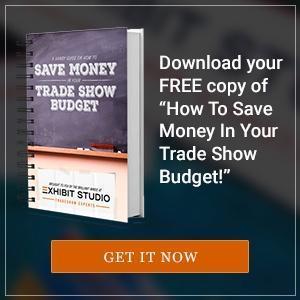