China Petroleum Technology & Development Corporation (CPTDC), a subsidiary of China National Petroleum Corporation (CNPC), is the largest supplier of Chinese petroleum and petrochemical materials and equipment in the world.

In 2014, the company sought a display fabricator to partner with them to build its 40'x60' vision for the Global Petroleum Show (now known as the Global Energy Show). Because they had committed to attending GPS for a few more years, they were looking for a long-term partnership.
At 40ft w x 16ft h x 60ft d, the exhibit plans were impressive. The build called for a custom 30ft w x 15ft h x 13ft d tower that included a 16 monitor video wall, a storage room, and a meeting room with a frosted glass wall. Large pieces of equipment needed to be accommodated but the environment needed to be comfortable without feeling industrial. 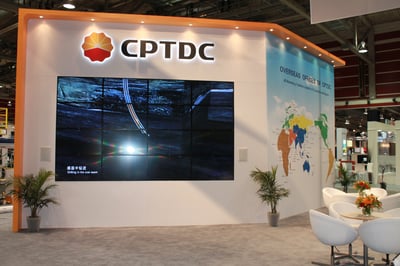 Our relationship with Dolphin International Media and CPTDC started over lunch when they sent their account manager Andy O'Hare on a trip from Beijing, China, to Calgary to interview local display builders. We had no idea that this would be the beginning of a partnership that has continued to grow stronger over the last six years.
Andy needed to be confident in his choice of an exhibit house as he would be managing the project from overseas. He was impressed by our knowledgeable and experienced team. After seeing samples of our work and spending time in our in-house design, print production, and custom fabrication departments, he was confident that we were the reliable partner that could bring their client's exhibit to life.

There were several challenges the project faced, including limiting CPTDC's exposure to risk, communicating between cultures and languages, working between multiple time zones, the exhibit's technical requirements, and ensuring a turnkey result on opening day while remaining on budget.

CPTDC is an active exhibitor globally, but GPS is the only show CPTDC attends in Calgary. Together we quickly decided that it didn't make sense to ship a custom booth across the ocean for the event every year. 2014 had already been marked by labour disputes in Vancouver, bringing the international movement of displays into Canada to a halt. Receiving certificates of compliance for the materials used when building in China also takes time. The client wanted to limit their exposure to risk and potential complications moving towards looming show deadlines. The decision was made to build in Calgary. 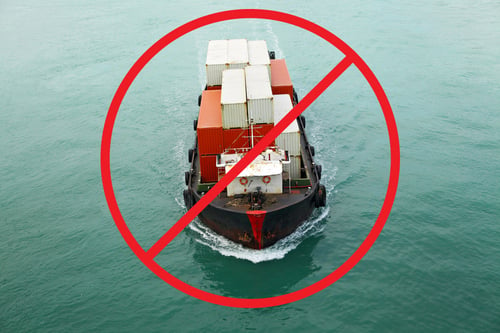 The exhibit's bold external walls were impressive from aisles away with 15ft tall full colour decal graphic panels: hanging structures, double-sided lightboxes, multiple product stands, reception counters, and an eye-catching backlit bar complete the comprehensive list of features in the space. CPTDC's exhibit could be seen from every angle in the BMO Centre and stood out amongst the crowd.
CPTDC and Dolphin Media know that they can count on our team to handle every aspect of the display from printing, building the structure on-site, and ensuring the exhibit space is trade show perfect! 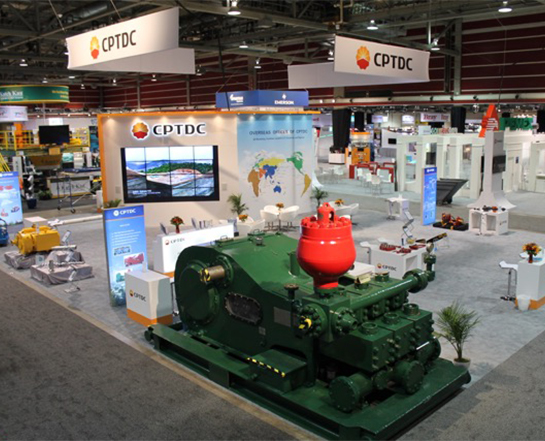 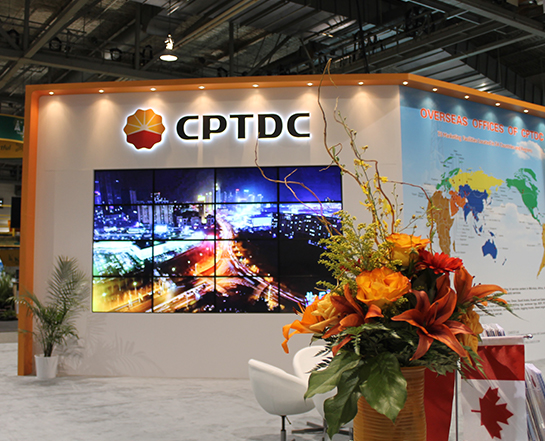 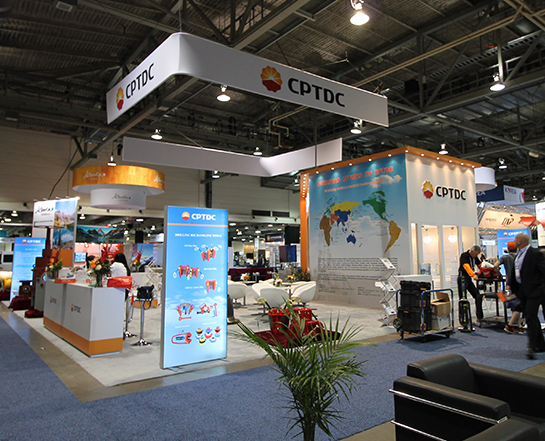 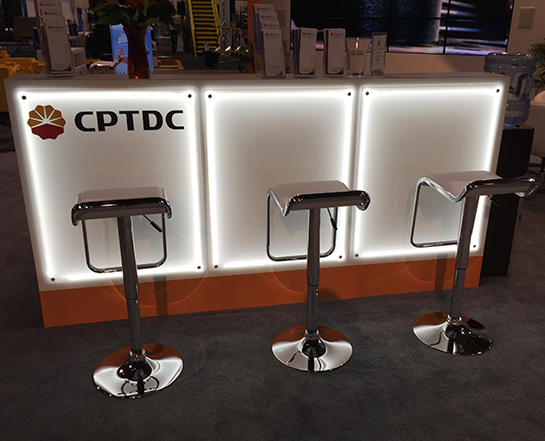 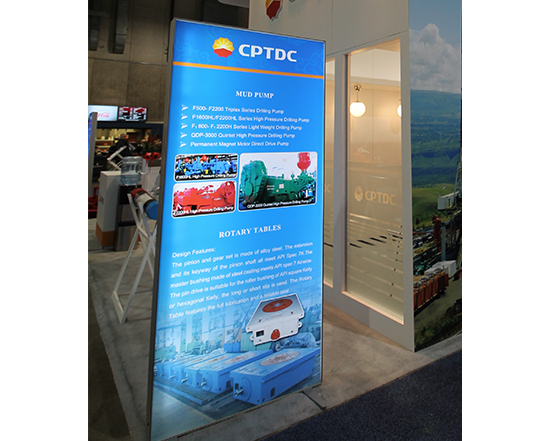 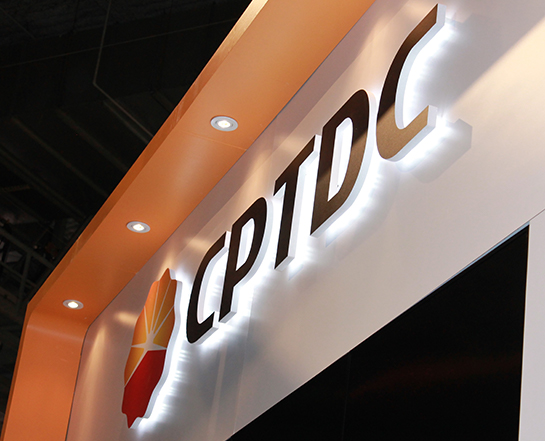 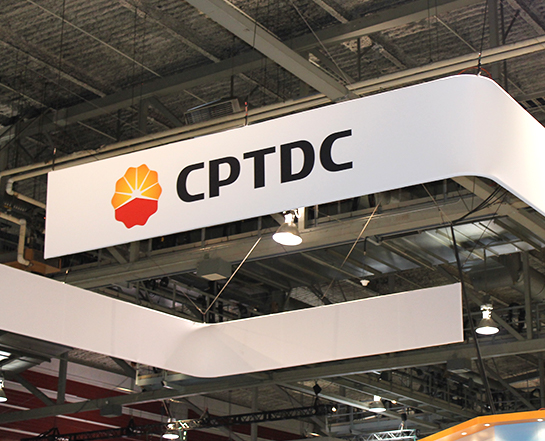 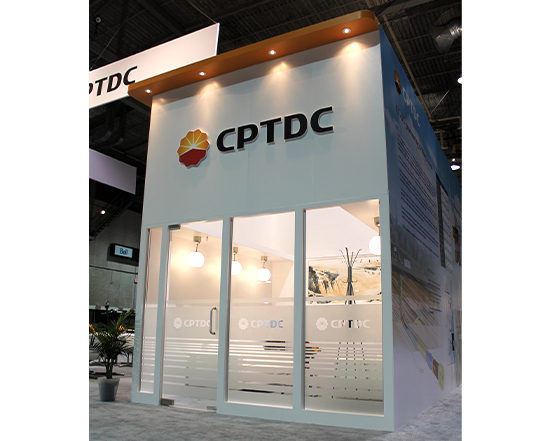 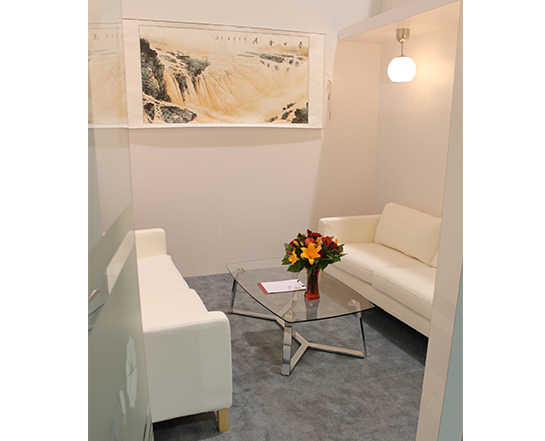 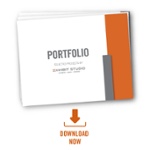